House Jodon landed on and colonised Lionis. This volcanic planet has 1 side of it perpetually facing its sun. 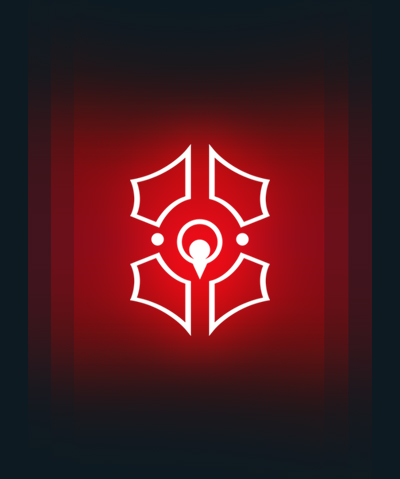 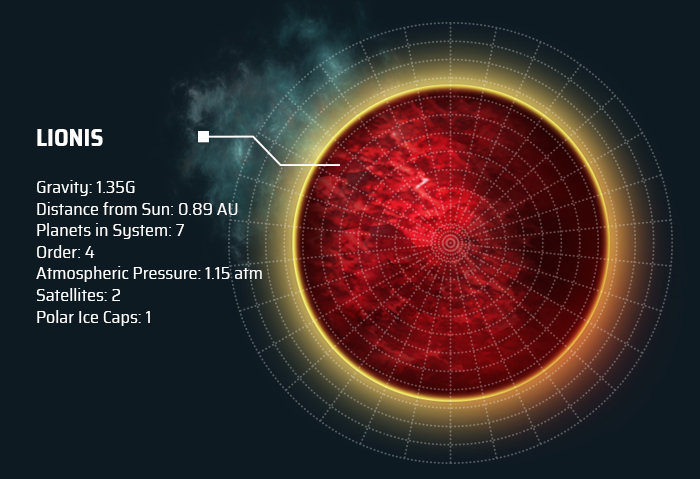 Lionis is a strange planet. It’s axis of spin is parallel to the ecliptic and its southern pole perpetually faces the sun. It is tidally locked to its sun. This leaves a thin band around its equator where life is possible. The area surrounding its south, sun-facing pole is far too hot while its north pole is a frozen wasteland.

Volcanoes and magma pools pepper the landscape and even give much of the dark side of the planet an eerie red glow. Aside from molten rock, there are also countless hot springs, geysers, and hot mud pools. Consequently there is much farmable land.

Forests and jungles are relatively rare on Lionis, and wooden buildings are even rarer. Most are built from stone which is in great abundance. Most forests are farmed and curated.

The Jodons have become experts in forging stone for building and constructions. Everything from furniture and kitchen utensils to houses and other buildings is stone much in the same way concrete was used on old Earth. Consequently, Jodons are quite physically strong as everyday life presents a workout.

Extensive cave systems are common all around Lionis. Many have been further excavated and turned into residential areas, particularly in areas with perpetual sunlight.

Somewhere along the line something went very different in Jodon culture. To call them brutal or savage would be understating the case. Blood sports are the norm and human sacrifice is common practice. Their old adage “eat the weak” may be more literal than most Reubos or Ephrati would like to believe.

Jodons are divided into 4 classes: the scholarly class (Peritus), the political class (Ora), the worker class (Oper), and the under class (Pug).

Pugs don’t live long. They provide entertainment for Jodons, i.e. bloodsports. Their entire existence is dedicated to violence. Only about 65% of Pug children survive to adulthood.

The Opers are raised to fulfill specific roles, and usually in apprenticeships under their parents.

The Oras are very different. Ora children attend state indoctrination centres. Violence in the Ora class tends towards subterfuge, such as assassinations with poisons or firearms or a “hands off” method. The Oras make up government, including bureaucrats.

Progress in society is driven by the Peritus. They are the only Jodons that have any formal education and they make up the doctors, engineers and the like in society, i.e. all highly skilled trades and professions. They’re typically very well armed as they can afford better weaponry than the Pugs or Opers.

The various classes are generally fairly segregated from each other, so there’s little violence between them in their local communities/enclaves. However, in public spaces there are still plenty of inter-class clashes.

The Pugs are resentful of everyone and will launch into full scale assaults on other classes for looking at them. They are less likely to assault Oras though. Pugs tend to be relatively poor and can’t afford the same high tech weaponry that the Oras and Peritus can afford. Consequently clashes between them end up with a Pug corpse and a smirking Ora or Peritus.

Perhaps the largest scale violence occurs about once every few generations when resentment in the Opers and Pugs boils over and they cull the population in countless mobs. Those Oras are the first to encounter their wrath. Those riots tend to devastate entire neighbourhoods leaving a bloody wake of dismembered bodies littering the streets. Anger then turns towards the Peritus, but these attacks are generally less damaging as the Peritus tend to have good preparations, i.e. defenses and weaponry. By the time the Opers and Pugs turn on each other, they’re mostly worn out and casualties are fewer.

The common view of these revolts and bloodbaths is that they’re good for society and help balance the high birth rate on Lionis.

The cult surrounding the Supreme Leader is all encompassing. Baron Vostok is worshipped akin to a god. State liturgies praise him and his leadership for virtually every aspect of life.

Daily life includes fending off regular low-level assaults. Jodons pick on each other even in the most mundane situations, such as standing in line at a meat market. It’s near impossible to walk a few blocks without seeing a fight of some sort. Needless to say, there are many hospitals on Lionis, and the emergency rooms are always full. An estimated 18% of the economy is spent on healthcare. Violence in hospitals is very low as doctors and nurses are all very well armed.

Punching up is considered virtuous by Jodons, and punching down on someone significantly weaker than yourself can land you in a world of pain mostly likely delivered in the form of an angry mob. There is a commonly held honour system that is mostly obeyed, even if it is rather contradictory.

Children born with birth defects are killed immediately. Occasionally a mother that tries to defend her infant with a birth defect will be killed along with the infant. Children that exhibit problems as they begin to mature more are subject to greater brutality in order to cull weakness from the gene pool. Those that overcome that adversity are respected for it.

Drug use on Lionis is widespread with painkillers being ubiquitous. They make up a significant part of the economy.

Jodons revere the dead by digging a shallow pit then placing the body in it with a fire above the head. It’s expected that the spirit will follow the flame into the afterlife. Wild animals then feast on the corpse. Several months later the bones, or what’s left of them, are covered in earth.

Jodons are polygamous with alpha males taking several wives. Marriages are held in the morning with a large feast in the evening. The traditional way to “tie the knot” is for the bride and groom to cooperatively use a large saw to decapitate a live entpig (an animal similar to an Earth pig that is native to Lionis and a staple part of the Jodon diet). Needless to say, the couple is showered in blood as the jugular is cut. The entpig is then slow cooked for the evening feast. The bride and groom usually attend the dinner still in their blood soaked clothing, although lately it has become more common for couples to change into clean clothing during hot weather so as not to attract vampiric insects.

Jodons worship Baron Vostok as a semi-divine direct descendent of King Solak who according to the lore swam in a lava pool to save his son from a lava fiend, a particularly nasty creature native to Lionis. Jodons perform ancestor worship as tribute to those that came before them and that have led them to where they are now. Worship of Baron Vostok is manifest in litanies performed during public ceremonies and state holidays.

The Jodon economy is loosely a free market despite its overtly authoritarian government. While most of society is regulated by the state, Jodons don’t feel any particular duty to follow the law but instead rely on their fists. Consequently much of the market is the black market.

Irrigation systems on Lionis are built out of porous stone pipes that let water seep through. They’re heavy and require significant effort to install, but function flawlessly with no maintenance. Animal husbandry is quite advanced and many animal species native to Lionis have been domesticated.

Stone is used in much manufacturing. The Jodons have developed techniques to effectively treat and cast molten stone in the abundant lava pools. Many factories reside on the dark side of the planet (which is extremely cold) surrounding lava pools where it is easier to cool down newly cast items. Eruptions in lava pools can destroy factories, but the risk is low enough to still make operations profitable.