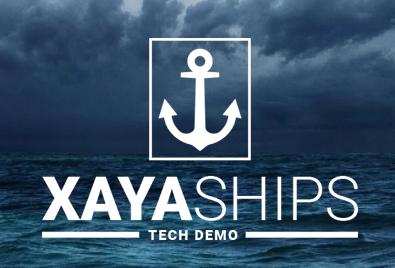 2 years ago we released a Game Channels technology demo called “Xayaships” to show developers how to create real-time true blockchain games. It is a simple implementation of an old board game popularised by Milton Bradley’s “Battleship”. (A very similar game, “Basilinda”, was first published in 1890.) Players take turns firing at each other in an attempt to sink each other’s naval fleet. We also created a basic front end (GUI) for the game.

This latest tech demo v0.2.0 upgrades the front end for a much better, friendlier user experience. In particular, the new chat room lets players organise new games and banter between each other.

This cryptographically secure system guarantees that whoever you are authenticating or chatting with is really that person. (Users must still watch for homoglyphs, e.g. for “a’, you can have a, ɑ, α, а, ⍺, ａ. However, that is easily mitigated.)

XMPP is a secure, decentralised, open source, and extensible platform for messaging. The Xaya XMPP Broadcast library implements a broadcast method for game channels to facilitate real-time gameplay. It is used for receiving game state data for simple mode clients and for game channel communication between peers.

Other changes in the Game State Processor (GSP) also help make for a better user experience, e.g. new Xayaships game channels time out so that other players can’t simply join very old game channels, file a dispute, and get an automatic win.

The Xaya Electrum SPV wallet has also been integrated for a simple mode similar to the simple modes in Soccer Manager Elite and Taurion, where players may not even know that their game is being played on a blockchain. This seamless experience will be an important factor for the broader adoption of Xaya blockchain games and blockchain games in general.

The net result is a much more playable, fun game that’s ready for a broader audience of gamers who aren’t necessarily very crypto-savvy.

Simple mode combines several components of the Xaya platform. The following diagram illustrates how it works.

The Xaya Architecture — Under the Hood article explains the architecture in detail. You can find all the source code at the Xaya GitHub repository.

GETTING CHI FOR NEW PLAYERS

New players that haven’t played SM Elite or Taurion in simple mode will still need to obtain tiny amounts of CHI to create names and open or join channels. They can get this by either asking an admin or moderator in Xaya’s Discord, or through any other means, such as from friends, exchanges, or signing up for a free SM Elite starter pack.

If you need a coin, tag an admin or mod and ask in the Xayaships Discord channel here:

You can get the current development version of the front end here:

The Xayaships GSP (daemon) is part of the libxayagame repository and is available here:

You’ll need an opponent to play against though as it is a 2-player game. You can try finding someone to play against in the Xaya Discord server (make sure to check in the #xayaships channel):

Let’s see what you can do on the Leaderboard!

Xayaships demonstrates some of the most advanced technology in the blockchain and Bitcoin industry. The source code is freely available for anyone to download, compile, change, or simply learn how to have nearly infinitely scalable real-time games with thousands or millions of users.

We invite you to download, play with, and explore the possibilities available to you with Xaya.

Developers can get answers and support in the Xaya Discord server. Simply tag one of our developers, mods, or admins and we’ll get back to you.